It’s a Mad Mad Mad Mad World (1963) is my favorite film of all time. You’d already know that from my video Top 30 Favorite Films (part 3), and my Location Hunt where I fulfilled my childhood dream of standing next to what’s left of the Big W, but I could never explain why exactly it’s my favorite film. It’s as if you don’t really pick your favorite films. They pick you. There’s something about it that just simply makes me feel happy. (To be honest, the only thing I dislike about it is the title. Having to say Mad 4 times, drives me nuts!)

On November 7, 1963, it premiered at the Cinerama Dome, in gigantic 70mm glory, being one of the first movies shot in “Cinerama” with a single camera. Before, the Cinerama process combined multiple cameras and projectors to create the large image. This premiere was the only time the movie has been seen in it’s full cut. Before it went out for general release around the world, it’s whopping 3 hours, 12 minute running time was cut down to 2 hours, 41 minutes. Certain scenes have been said to be lost forever. Only if you were at the premiere, would you have seen them, such as a phone call between Spencer Tracy and Buster Keaton, and most interestingly Dick Shawn, the crazy “nut” Sylvester. No one could forget the scene where he defends his mother’s honor by chasing someone in a car and running them off the road. Ever wonder how he got that car? Apparently, there was a scene where he stole it!

Honestly, I think the movie is paced just right. There’s a reason why movies get shortened, and that’s because they’re too long. At 2 hours, 41 minutes, the movie has always felt perfect to me, it never gets boring, but if you’re a hardcore fan like myself, then of course, you’d be interested in seeing the longer version. Also, part of the appeal is that the whole movie feels like you are traveling in REAL TIME with these characters down the California coast. (Supposedly, director Stanley Kramer’s original rough cut was 5 hours long!)

Over the years, for some of the VHS and laserdisc editions, some lost footage has been found, and edited back into the film, resulting in a partially restored 3 hour, 12 minute version. It’s even been shown on TV. I still prefer the shorter version, but there are some funny moments here. With the more recent DVD and Blu-ray releases, this footage was never included. I assume that’s because the found footage is of a lesser image quality, because they couldn’t locate the original 70mm film stock/ negatives. On VHS, it was never noticeable, but with the technological advances, the footage would stick out too much.

One of the things that’s been interesting to me, over the years, is always getting to see the movie fresh and new. In the 80’s, I was watching it panned-and-scanned on my old TV, which is criminal for a movie like this. Then, sometime in the early 90’s, I finally got to see it “letterboxed” widescreen, in it’s full ratio, or so I thought. In the 2000’s, when I saw the DVD, I thought, this is amazing, it can never get better than this! But then, a few years ago, came the Blu-ray. Wow! Not only is the image quality insanely clear, as if you’re actually looking at the California landscape with your own eyes, but the ratio was even wider! Holy crap. I couldn’t believe how much of the image I had been missing all my life. The sides of the frame were cut off before. It was literally like seeing more of the movie, for the first time. So watching this movie has been a life-long process. I’ve slowly been seeing the whole thing, and savoring it! It always feels new to me. 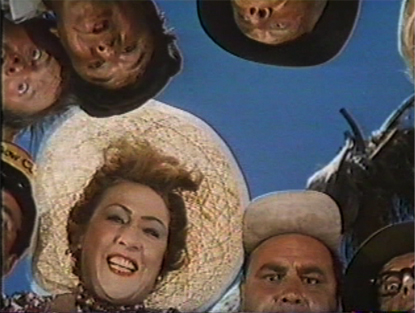 Now, we are at another milestone. Criterion is releasing a new Blu-ray for it’s 50th Anniversary. THE FULL RESTORED VERSION??!! According to the site:

“New high-definition digital transfer of a 197-minute extended version of the film, reconstructed and restored by Robert A. Harris using visual and audio material from the longer original road-show version—including some scenes that have been returned to the film here for the first time—with 5.1 surround Master Audio soundtrack on the Blu-ray”

So that means all the “lost” scenes that nobody’s seen since 1963 like the Buster Keaton phone call and the Sylvester car theft scene have been found? I’ve searched on numerous sites around the internet and it doesn’t seem like anybody’s talking about them. I figured this would have been a bigger deal, if it were true. 197 minutes is 3 hours, 17 minutes which makes it 5 minutes longer than the Premiere version. At least from what’s been reported. One thing that has to be said about all these different run times is that they can vary, deepening if you’re counting the Overture and the Intermission. During the premiere, the intermission was said to have the police radios playing through the lobby, while audiences went to the concession stands. All of that could have been counted for the extended run time. Regardless, if this Blu-ray has a 197 minute version, then it must include all the footage from the Premiere, which is very exciting. If anyone can confirm this, please let me know.

Either way, it sounds like THIS is the version to get. It also includes the shorter version, so you can’t go wrong. It comes out January 21, 2014.

UPDATE: I’ve gotten some clarification. The 192 minute (3 hours 12 minute) run time I had for the Premiere version did NOT count the police calls during the intermission. With the phone calls, it would have been 201 minutes. This new restored version includes the police calls, which is where the 197 minute run time is coming from. That means it’s not 100% complete, but it’s pretty darn close! It’s only missing 3 minutes, 20 seconds of footage. Some of that can be accounted for in the Laserdisc/VHS extended version from 1991 which had a very tiny scrap of footage that wasn’t included this time around. I’m not sure why. I believe it was in the gas station scene, which may be the most memorable scene in the movie, but the footage in question is very brief. Basically, what this all boils down to is that 26 minutes, 40 seconds of newly discovered has been restored! Are they the specific scenes I mentioned? We don’t know yet. It’s been a secret so far. It’s definitely exciting.