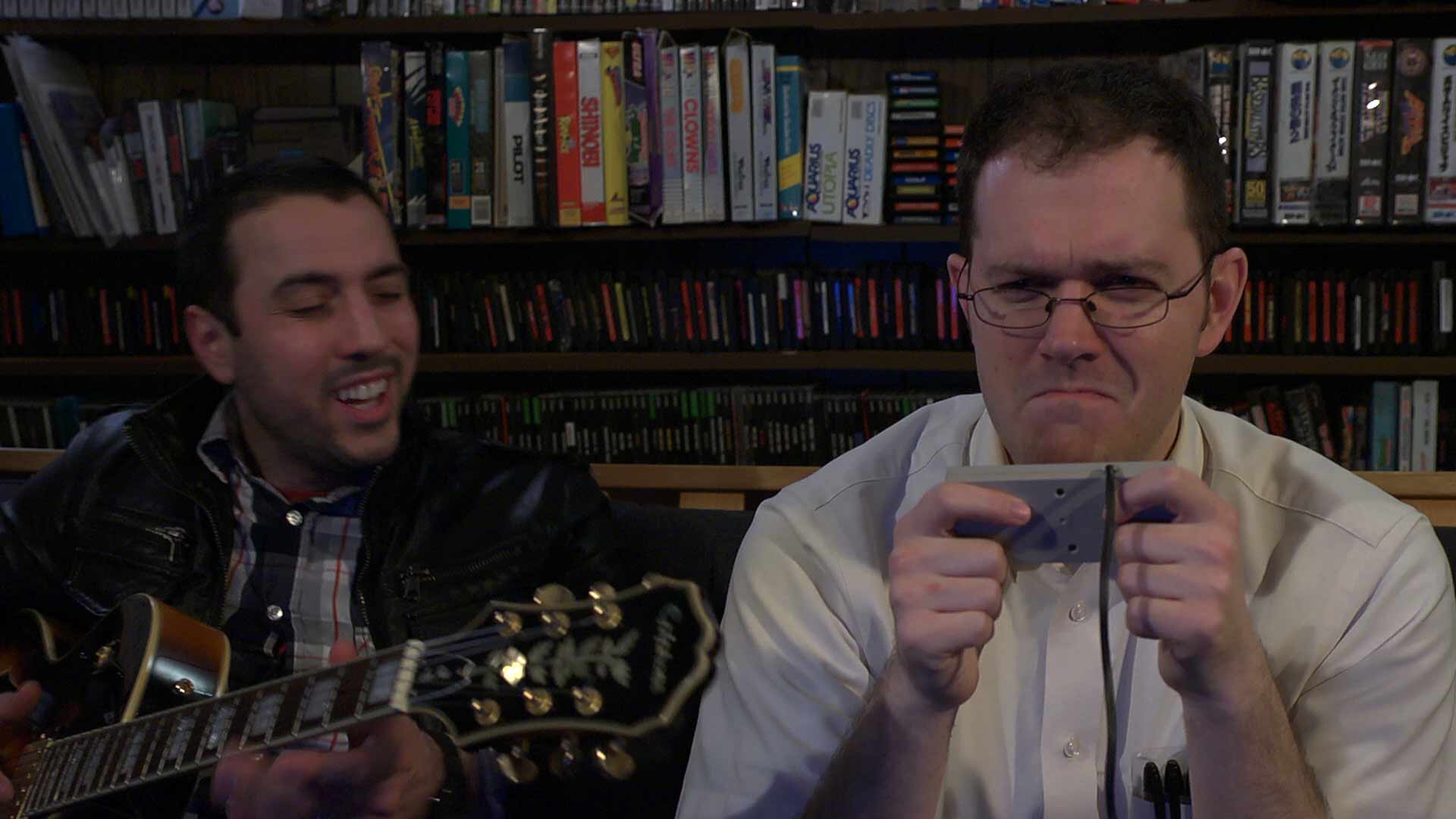 I laughed myself to tears while editing the latest AVGN episode. It was that kind of laugh when you feel your guts tense up and you topple over in pain. That’s how it was. I literally collapsed in front of the computer, wiping tears from my face.

I’d forgotten that a week before, I was sitting in that same place, trying to come up with a script. I was scratching my head, staring at a blank screen. Nothing was coming to mind, other than the same generic game rant. “Look at that?” “I’m stuck in the wall!” “Fuck!” “What were they thinking?” The verbal inspiration was gone.

The game itself was one I’ve been wanting to do ever since 2006 when the Nerd first became a regular series. The Nerd’s initial hit list included games like Top Gun, Ghostbusters, Fester’s Quest, Dick Tracy, Super Pitfall, Ghosts N’ Goblins, and Ikari Warriors. All NES games that I’ve played when I was a child, that frustrated the hell out of me. Over the years, I’ve been completing that list.

Now that I’ve finally gotten around to Ikari Warriors, I had trouble writing something that was fresh. Had I reviewed this game earlier, it wouldn’t have been a problem. But now, the formula was wearing old, and knowing that so many people are going to be watching, makes it even tougher. If only I could make it feel original again, and go back to the past…

So I called an old friend, none other than the Nerd’s “guitar guy”. I wrote Kyle into the script. The script still sucked, but I had good faith that he would be able to ad-lib and improve on my mediocrity. Also, with Mike in the room filming and suggesting ideas, it helped fuel the creative process. The songs Kyle sang were improvised entirely without any rehearsing. It was so spontaneous that doing another take only resulted in a different song. That’s why you see me laughing. There’s no other takes to use. It was probably the most improvisational AVGN video since Spiderman.

Meanwhile, the AVGN Movie went on halt. Anytime I work on something different, people are waiting on me for instructions. I can’t do two things at once, especially when both require so much focus. That’s why I had to finish this episode as quickly as possible. It felt just like the old days when I had deadlines. Since this video was so improvisational, it was a lot harder to edit. I’d have to watch through hours of footage, just to figure out how to assemble it all, and give it a nice flow. While editing, I saw the sun rise many times. Smoothing out the audio transitions, fixing the color, making revisions. It was the same old process that I’m so familiar with. My wrists hurt, my eyeballs felt like they were burning out of my skull. That’s the feeling all us editors, filmmakers, web producers and anyone with an “abnormal” job all must feel.

That’s when the laughter kicked in. Full force! Maybe the exhaustion made me delirious. I asked myself, did we lose our minds? What kind of video did we just make? But that’s no different from when I started the Nerd. I didn’t stop and think about what I was doing. I just did it. Is it funny? That’s up for the internet to decide. We all thought so, and we hope anyone can at least get a laugh out of it, and feel like you’re in the room hanging out with us. Enjoy it, because now I need to go back into hibernation and work on the AVGN Movie. (That doesn’t mean not to expect another episode. More will come.)