This must be the most sacred spot, publicly accessible, for Back to the Future fans. However, the space time continuum changed it from Twin Pines Mall to Lone Pine Mall and eventually to Puente Hills Mall (that’s the real name). It’s located in Industry City, CA.

The picture on the left is from the movie. On the right is me standing close to the same exact spot where Marty makes his skateboard entrance to the parking lot. 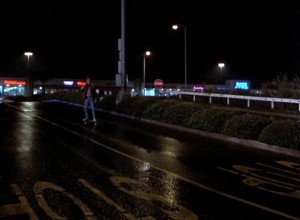 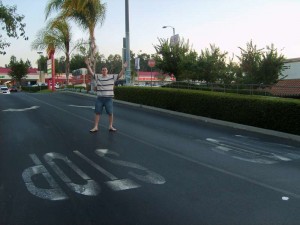 Here’s the ramp overlooking the parking lot. As you can see, there’s no sign. Also, the JCPenney building in the background has changed to a sports center or something, I can’t remember. 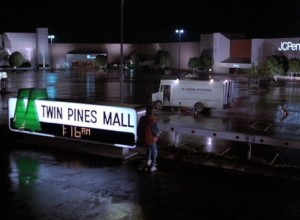 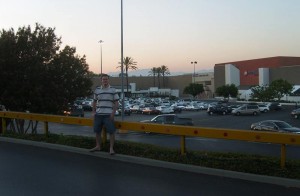 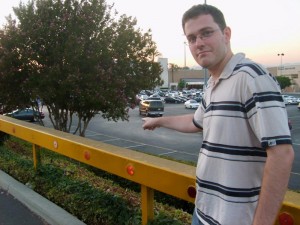 Below, this is where the Doc first tested the time machine. A good friend of mine joined me here. As you can see, we are both standing in the same spot as Marty and Doc. However, the building in the background appears closer in our picture. That could be due to the lens,or we needed to be further away. 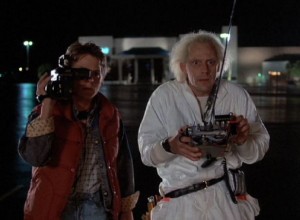 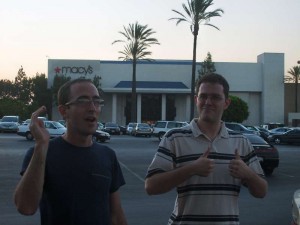 Assuming we are indeed standing in the right spot, we matched up the former JCPenney building (to Doc and Marty’s left side). Our camera angle is a little off, but we are now positive that we are on the mark! This is where the DeLorean made its first time travel! 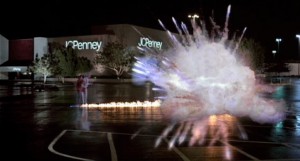 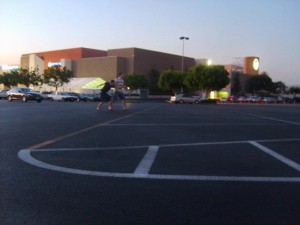 The sun was setting, so we tried to make the best of our last pictures. Below, you can see us facing where the DeLorean races toward Doc and Marty before bursting into a fiery trail. Notice the street light on the right. That’s where the DeLorean starts. Our picture would have been pitch dark, so we stood a little closer, so you can see more detail, like the yellow barricade in the distance to the left. 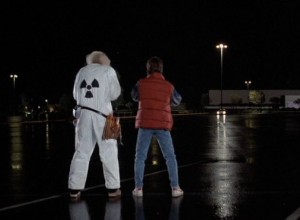 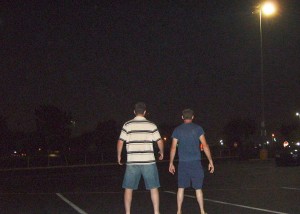 Now, we gave in to the urge to scream “88 miles per hour!!!” Although, we’re facing in the opposite direction. It was unplanned. 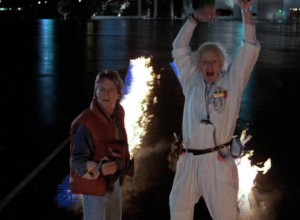 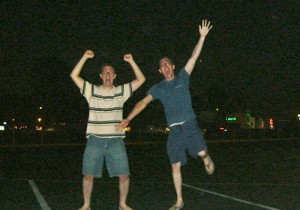 Now for the ultimate discovery! Looking at the spot we already established as where Doc and Marty stood, we noticed a strip of black tape. At first, we thought nothing of it, but on closer examination, it was gaffer tape, the kind used in movies. It would have marked where Michael J. Fox and Christopher Lloyd stood! 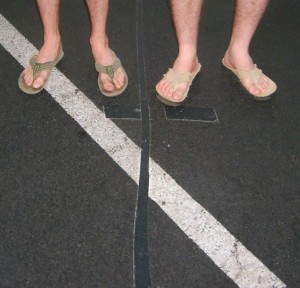 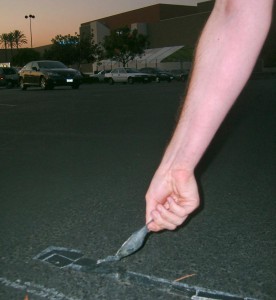 Maybe it’s a far fetched idea to assume that the asphalt was never repaved in 23 years and that the same gaffer tape would still be there. But, it looked like it had been there for a long time,and it doesn’t rain much in California. Maybe, it’s possible. We thought about the possibility of a fan putting it there. But, why would they use black gaffer tape over black asphalt? Why wouldn’t they have done something more obvious like use red spray paint to make the fire trails? Another possibility is that another film was shot there, perhaps as a tribute to Back to the Future. 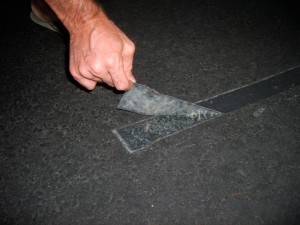 Whatever the case, I saved a piece. But,I’m not selfish, so there’s plenty left, if you go. If anyone has answers to why this gaffer tape is conveniently placed on Doc and Marty’s mark, then let me know. But on the other hand, it would shatter my little dream.

That’s it for Back to the Future locations. I also drove by the neighborhood where George McFly falls out of the tree. It’s in South Pasadena, near all the Halloween stuff. There’s George’s house, Loraine’s house, and Biff’s house, all in the same block. Not to mention, the house where Biff throws the kids’ ball up in the roof. I drove through kinda quick and didn’t get any good pictures. It’s not much to see anyway. Some day, when I come back and am on leisure time, I might visit more locations.

Tomorrow, an old movie of mine makes its online debut.